SSSS… I am Cobra Libre 2 and I will destroy you! REVIEW

We’ve already had Cobra here. And don’t worry, we don’t mean a live one that would bite you hard or spit in your face. We mean the Cobra Libre (first generation) – we tested that one 4 years ago (wow, and that wasn’t even the first of our reviews – we’re peasants in the world of ero-toys already). At the time we liked the materials, the unconventional stimulation ( a far cry from the classic Fleshlight vaginas), but we understood it wasn’t a toy for everyone. Both in price and in a new way of stimulation that is nowhere near the peek-a-boo of regular sex. 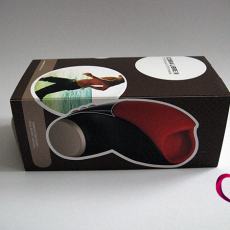 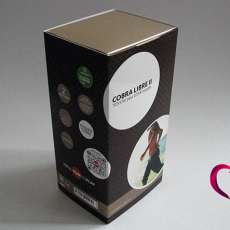 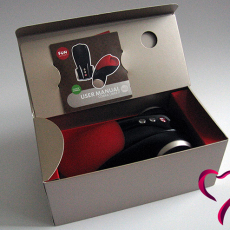 You can indeed tuck your pompom into Cobra Libre 2, but definitely not over the top. If you do, you’ve got a really, really small one (sorry for the incorrectness) and you’re not going to make much of a spectacle of it. It’s only 7 cm deep. Yes, it’s not the classic artificial vagina we test in the editorial office. And that’s why we were wondering if it can compete with the classics like Tenga, or Fleshlight, or even the delicious Verspacken from Big Teaze Toys.

For a first introduction for those who didn’t read our first review and can’t imagine from the photos what such a black and red design is used for. The red part is made of soft medical-grade silicone and forms a nice sleeve into which you stick the tip of your penis – mainly the glans and a few inches of its body.

Underneath the bottom of the rigid tube are two vibrating motors (and cruelly powerful ones) – you control these via a trio of buttons on the top of the toy. They’re in a great spot. You can hold the Cobra perfectly with your left (or right) hand – thumb at the bottom and the rest of your fingers on the controls. Everything is within arm’s reach, nothing slips because the foot of the chaser has side lugs – they look like sports car wheels…

What you get in the package from Fun Factory 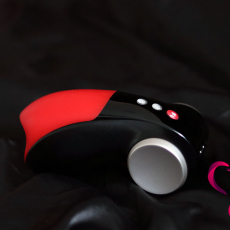 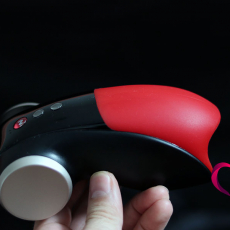 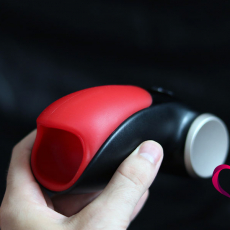 Car lovers will be familiar with the American classic Ford Mustang Shelby, nicknamed the Cobra. The most over-the-top cars that have retained their popularity even decades after they were first introduced. Fun Factory’s Cobra also retains its popularity – even though it goes against the tide and doesn’t offer classic penetration. Both Cobras are very similar in performance. Even our smaller one (one could almost say pocket-sized) has a lot of power. And even on the weakest mode.

And you have several of those modes (11 – WOW = check out the pics for the vibration diagram). The first one is a subtle introduction to vibration, the next one will wake you up nicely if you’ve been sleeping. The 6th and 8th are very interesting – the strong pulses of the alternating motors will make not only your hands, but your whole lap shake. 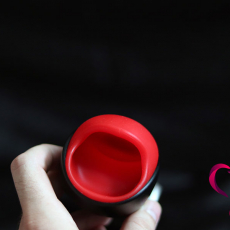 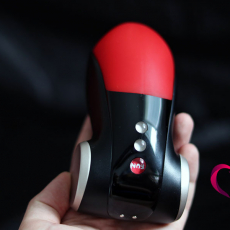 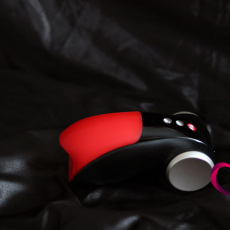 And the differences between the weaker and stronger pulses will feel like a very strong massage. The controls are easy as pie. You press the FUN (or fun) button at the beginning and then just switch between modes with the + and – buttons.) You turn the toy off with the same FUN button as at the beginning. Nothing complicated that you need an engineering degree for.

The proven CNC magnetic charger, size and shape and waterproofing have been retained. What’s actually new? Velvetier (softer silicone – you can really tell the difference), backlit button controls, charging indication, the ability to lock the buttons against spontaneous activation (great for travel)… Anything else? Yes – modes – one new pulse mode added + motor changes. For the same size toy they are noticeably more powerful. I have no idea how they crammed such power into a small body, but car makers could learn next time. 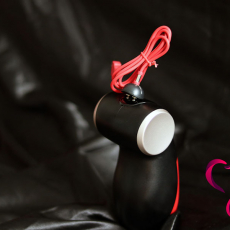 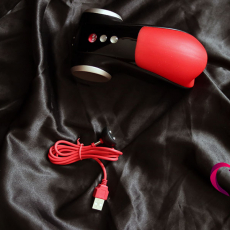 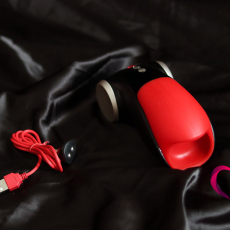 How does one use such a cobra?

You can’t do it without gel. In fact, once it’s applied, all resemblance to conventional artificial vaginas ends. We recommend a water-based gel (the recently tested Sasmar Classic is fine), avoid silicone, they might damage the delicate surface. Apply a bit of gel inside the chaser, use the acorn to spread it a bit on the inside walls and start… and the real FUN begins.

You can definitely tuck the acorn all the way in (unless you have a strawberry like your neighbor’s house), even part of the penis. Now what? First of all, relax. You’ll have to get used to this stimulation, because you probably don’t know the effect of vibrations on the penis. Even those who play with a massage head will be surprised. Vibration is very specific. They don’t just work in one direction – it’s as if they’re vibrating around the bridle. Imagine a very fast tongue vibrating in your lap. Add vibrations… And it still won’t feel exactly the same as with FF Cobra Libre.

Cobra Libre II is simply fabulous!
I am a 65 year old retiree, widowed 6 years ago. Since then, I have addressed my needs sporadically by hand. Lately though, it has bothered me quite a bit, it just isn’t the same, so I started looking on the net for other ways. I studied various reviews on different gadgets until I came across Cobra. As a retiree, it wasn’t easy for me to put that kind of money on a device, but I took a chance, and I did the right thing!
When the Cobra arrived about 2 weeks ago, I was quite surprised that there was no seal on the box, guaranteeing that no one had ever opened or even used the device before me. So that made me very upset. But I thoroughly cleaned it, charged it and eagerly tried it out.
Without the gel, it just doesn’t work. The feeling after inserting is very pleasant, the material is really good quality. After switching on very pleasant, unexpectedly intensely pleasant sensations. I have tried all modes, I like the faster vibrations of 2 motors at once. I move the Cobra gently, within a range of about 1 cm, this increases the intensity of the experience even more. In addition, I “pump” the air out of the very front (back?) part, so the acorn is in vacuum and when moving it is a perfect “blowjob”.
I don’t know whether to consider this an advantage or a disadvantage, but I am always done within 3 minutes and I certainly don’t have the aforementioned increased bridle sensitivity. I read in some reviews that the gel leaks out of the Cobra when used, I didn’t observe anything like that, and I’ve also practiced it lying on my back, so in theory the gel had a way to leak out – nothing anywhere. The cleaning after use is invaluable: I rinse it thoroughly using disinfectant soap, then simply shake off the water and put it away. Incidentally, this was one of the reasons I decided on Cobra. When I read how artificial vaginas needed to be maintained, some even had a limited number of uses, I rejected them.
After washing both the device and the instrument, I still have that very soft but fantastically pleasant tingling sensation for a good while. I haven’t read about this anywhere, but it feels really amazing!
Among the pros of the Cobra I would include mainly the workmanship, decent appearance , easy maintenance, quite good battery capacity, many modes, low noise, excellent efficiency.
Cons: packaging without a seal (that really bothers the hell out of me), the stroke of the eccenters could be a bit bigger, the inner diameter is so-so, at that price the product could directly contain both gel and some disinfectant spray, and of course the price.
And I don’t know whether to consider it an advantage or a disadvantage: While before I had a frequency of hands 2-3 times a week, now I don’t give a damn, I use Cobra 2 and sometimes even 3 times a day, until I’m afraid not to “work” myself to death 🙂 I just remember the possibility to use it and I already feel the hints of erection.
I don’t want to impose my opinion on anyone, it’s up to each person to try it and give so much money for Cobra at the risk that it may not be right for them. Fortunately, it worked out for me. If I had to rate the quality of sensations, the Cobra comes first, followed by classic sex with a woman (and I had several partners in my youth), then nothing for a long, long time, and finally my hand.
So my overall assessment: the Cobra Libre II is the perfect product for a single man!

Thank you so much for the great review/test of the Cobra – we agree with you that functionally it is perfect and the specific teasing of (even just) the bridle and glans is very intense!

Have a nice day,

with silicone toys, the problem is only with the silicone oil – latex is a completely different material – I would just look at what oil the condom is moistened with – if it’s anything other than silicone, that’s fine.

My friends and I bought it. The price is definitely off-putting. Oh, never mind. We split it three ways. The first experience is quite different from a normal fuck. Just lie on your back and put it on. The pleasure builds slowly but it’s a delight. Then it shoots out of you and the release is wonderful. It took me (21 years old) about 6 minutes. Depends on how in the mood you are. The advantage is that you don’t have to do anything. You can have it even sitting in a chair and chatting. The price !!!

Thanks for the feedback with Cobra 🙂 I would be really careful about disinfecting when sharing with friends, or ideally using with a condom.

Have a nice day, we’re glad we baited you for it 🙂 To start with, we would charge it first according to the instructions so you don’t lose battery capacity at first – to use – just a little gel inside, you don’t need much. Start on the softer vibrations, it worked well for me to wiggle and oscillate the cobra a bit to find the most pleasurable position to tease the glans/gland. Then move on to stronger vibrations/other modes – different suits everyone:)

🙂 according to your review I bought cobra libre 2 . Any advice on how to get started with this machine?

Finally someone who bought it and tested it – I hate factual reviews with only text and official photos from the manufacturer. I can trust you because you’ve had the piece in your hands, photographed it and filmed it. Thanks – I’ll think about it as an alternative to the fleshligt.