When I read the name of this egg, I had to think for a while.Helix? Is that like a DNA helix? I immediately looked at the pictures and recognized that this egg must have something to do with biology, because from the veiny appearance, my first thought was that it looked like a movie alien was about to jump out at me. I asked my wife if she felt like a brave Ripley.

When the luxury box arrived in the mail, a real gift wrapper, we acknowledged that this was probably pretty big league. 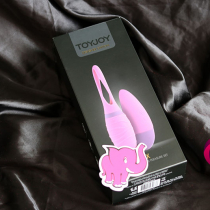 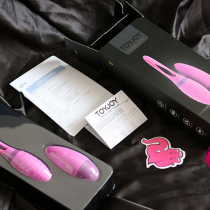 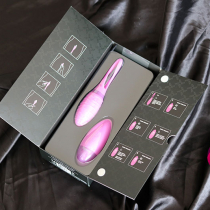 Both parts are made of very pleasant soft silicone, so they don’t squeeze or get cold. Likewise, the shapes are more than cleverly designed. The tab on the egg itself is long for easy removal, and the actuator is just big enough to hold it in your hand and tease with it at the same time. The egg is also waterproof thanks to the material used, so you don’t have to worry about inserting it as deeply as possible (really, those ears do a lot!), taking it into the bath (you’d better keep the actuator dry, I’d be worried it’s not waterproof by the looks of it) and cleaning it under the tap.

What preparation for use?

There was a minor problem while plugging in the batteries. The egg holds one AAA, and the polarity is clear thanks to the spring to unscrew the cap. However, the two AAA battery driver confused me. I looked inside and the springs, normally a clear sign that this is the negative pole, were both in the depths of the driver, neither on the cap. 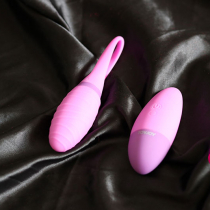 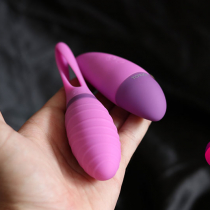 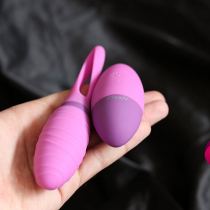 I deliberately looked at the manual, but it, although it contains instructions on how to insert the batteries, was somewhat silent as to polarity (the picture in the manual had the springs drawn differently than how they actually were in the egg.) In short, I’ve never seen a wiring diagram like this before. As it turns out, indeed the batteries don’t belong side by side in the same orientation, but one is necessary to put upside down. It’s just a detail, but a confusing detail. Then all it took was a little hygiene and the egg was ready for use.

It took a while to reach the controls

There is one hidden button on the egg, which has the slight disadvantage that you can’t find it by feel. So don’t expect to set the toy up as a nice surprise for your partner in the dark. You just have to turn it on in the light. The button only prepares the egg, the vibration or pulses are switched on with the remote control.

Find out how much the Helix Toyjoy Vibrating Egg costs“

And here’s where another minor problem arises. As I write this review, the product is sitting on the table in front of me. I have turned it on and tried pressing the buttons on the remote control (there are only two) to describe how it works. I can’t really. Yes, the top button turns on and switches modes by vibrating the egg. With the bottom one I control the vibration of the remote, which you can then attach anywhere else you want to tease.

It’s just that when I’m switching functions and generally trying out what does what after how many times I press it, chaos ensues. One button controls the vibration of the egg, the other controls the controllers… But then you suspect it’s the other way around. Then you press the buttons back and forth to change something. He’s actually in the system, but I have to admit that during each test I had to look for it again and again because I always forgot it.

But how does the egg satisfy?

Once you’ve plugged in the batteries properly and figured out the controls, there are only pleasurable things to come. The egg vibrates strongly, but not too much. When I turned it on after booting it up, my wife just stretched out on the bed blissfully enjoying the sensation.

After a while, I got into the action with the controller, which I placed against her vagina. Simply put, after all the taming of this toy, it turned out to do what it was supposed to do, and it did it perfectly. We played around with different modes of vibration and pulses, and there really is a plethora of them to choose from. Everyone will eventually find their favourite combination. Or, on the other hand, I have intentionally changed the style of vibration just to surprise my wife. 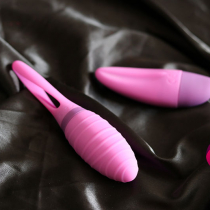 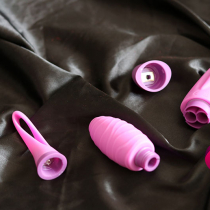 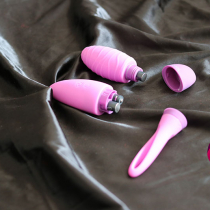 The egg is quiet. You only have to squeeze it in your hand to recognize that you can’t hear much. When it’s surrounded by significantly more flesh (that phrase sounds awful, but I refuse to give it up!), it’s not audible at all, so there’s nothing to prevent its use in public. Just be careful how you manipulate the controls so you don’t accidentally turn the vibration on it out of the blue in the theater.

All around, the Helix is a luxury piece that, while not entirely flawless, is really worth it once you get the hang of it.

Karel
Reviewer
After discovering that he couldn't write book, movie or music reviews, he decided he wanted something completely different. He's happy to try anything and everything, and will always be happy to write toy reviews with insight and humour. His wife is more than willing to test gadgets with him and add her own opinion to them, specifically how much a given gadget made her laugh the first time she saw it.