Tying can take many forms, the simplest of which include tying the hands or feet to the bedpost. Bondage (incorrectly referred to as bandage) can also take a decorative form, where a more ornamental binding occurs.

Among the most complex is highly elaborate binding, which also has ingenious knotting. They can not only act as a decorative element, but also make the tied person’s position significantly uncomfortable – the selected rope lines can undercut the breasts, the lap, or hold the tied person in an uncomfortable position.

We’ve broken down Bondage (or how to bind a human) in a multi-part BONDAGE tutorial.

Who is a rigger?

In the country, the best known riggersEdna Kinbaku and Joan von Brook are the two we interviewed very candidly.

Speaking of bondage (the art of rope), one can’t help but mention the Japanese one – Nawa Shibari – equivalent to the tea ceremony, with up to 500 years of history of the technique of tying up when apprehending criminals.

There are three basic bondage positions:

How do I get started with sexual bondage?

In the end, conservative couples will always be fine with a straight bandana or police handcuffs…. Alternatively, for lovers of colour and quick ties, there are the so-called bondage-bands – we’ve reviewed these for our readers as well. 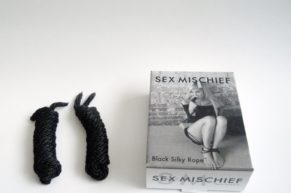 We tied our sub with ropes and bondage tape – TEST

We recommend these sex shops to you, because we buy there our sexual toys and we always get quality pieces at a great price: