“I want to fuck my boyfriend in the ass, and he’ll still offer it to me on all fours.”

From this plan was not too far from realization, because it was enough to agree with our editorial team on the selection of a suitable toy, which will soon be “free” for testing.

I want to enjoy it too! 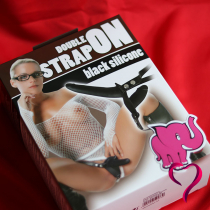 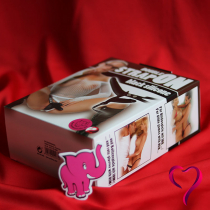 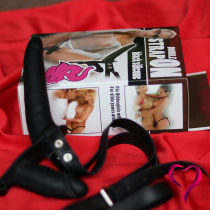 So as interesting piece that we didn’t review was Double Black. A black silicone panty with racy “leather” panties.

What do you get in the package?

What is a “double black”?

He’s right where you’d expect him

I really liked the toy and enjoyed it. If you want to spice up your play, you can try training your vaginal muscles. Try not to fasten the straps. It’s also a big advantage that everything is technique-free. You don’t have to worry about a dead battery or deal with an obstructing cable. 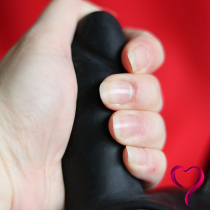 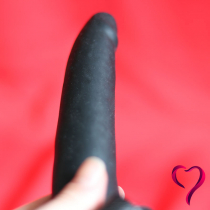 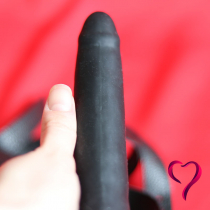 The situation was clear… him, my toy, with a leash and on all fours, me his Goddess with a corset and my new cock in my lap.

He knew he had to obey or I’d give him even more of a hard time, so he rather obediently let the leash lead him to the bed and still climbed on all fours on top of it… I had already prepared handcuffs, first on 1 hand, threading the chain through the bed rail (so he wouldn’t have rabbit intentions) and immediately locked on the other hand. He was still trembling, so I whispered in his ear:

He calmed down as I stroked his back at the same time, which arched in pleasure. My hand continued up his side to his exposed ass… With my hand, I signaled for him to take his shy little knees apart and show himself to me in all his glory. It was a great feeling to have him in my power and return his earlier “care” for me. To top it all off, he was given a soft but firm blindfold so he could only feel my touches anymore.

But it started right away… I whispered in his ear again:

“And now you’re going to get it, you bastard… I’m finally going to enjoy my revenge for last time.”

He shuddered solidly after that, but even when he tried, the cuffs wouldn’t loosen, so he was out of luck boy. I immediately showed him who the Mistress was, grabbed one of the candles from the bed so I wouldn’t be a bitch, blew it out, and started dripping from about a foot high wax onto his back… but he cursed… bending over and trying to get out of the way.

I hissed in his ear:

“If I find one drop of wax on the sheets, I’m going to suck and fuck your ass so hard that you’ll be laughed at at work for weeks because you’ll cry in pain every time you sit down…”

And by then he’d calmed down, knowing that when I’m in the caliber I’m capable of accomplishing anything.

I only bothered him with wax for a moment, I wanted to enjoy the main topic of the evening. His virgin ass. The one I’ll take and no other. And fuck it good, so he knows what it’s like to be the one downstairs, trying to get as loose as possible… 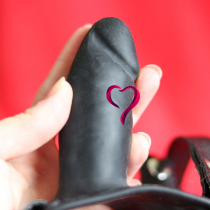 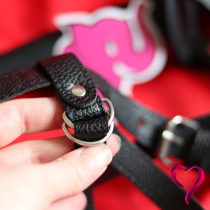 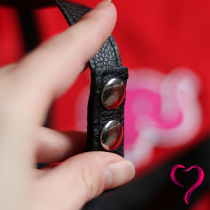 But first I had to get him calm and relaxed again, so I put the candle down and started running my fingers over his body, once grabbing his neck and kind of running over his naked ass. I skipped the hole, I was interested in his fucking hard cock (I don’t remember him being this hard – did he want to be my submissive bitch more often and was just embarrassed to say so?). All it took was a few circles around his balls and a wiggle of his fingers at his glans and he was flowing nicely for me… it was pretty hot to see drop by drop as desire overtook him…

He asked me to do it himself!

“Please don’t prolong this and fuck me…”

So he immediately got a good palm smack on his ass until he jumped up and another slap on his face… He had no idea which one was hitting until I told him that he wasn’t here to orchestrate and tell me what to do. I had to punish him, even though I hadn’t planned to. So I tried out how he can smoke – when last time he consistently tried it on me until he gagged.

Of course, he wasn’t very good at it, and mostly he didn’t really want to do it…

“Not my toy then!”, but the left hand on his neck and the other hand pretty firmly on his balls made him open his mouth. THEN I was running my tongue over his mouth, trying to see what he could do.

Not much, he didn’t expect it to end (and it certainly didn’t) like that, but there was some swearing… I enjoyed that:D Humiliating him like that, maybe next time he’ll be more gentle… O:) but I was still giving him a hard time until he asked to offer me his ass so I wouldn’t get mad…

“You bet you will, it’s all mine and now I’m going to show you how MUCH!”

And he definitely didn’t complain, in some places it even seemed like he was coming to me… We were several centimeters over each other, but I didn’t mind, I grabbed his hips and started to pull him over… I ignored the few painful moans, just occasionally flicked his balls again to calm him down and kept fucking him. 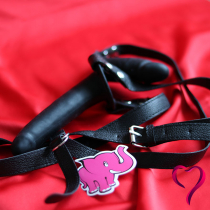 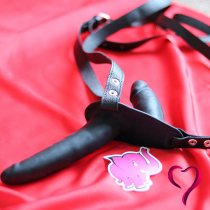 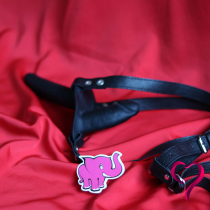 It just worked and I enjoyed fucking my boyfriend’s asshole. And you know what? I’m not ashamed of THAT!”

How do we rate him after 3 events?

I don’t have much to fault the toy as such, except perhaps the packaging and absence of packaging, so we had to sew one smaller fabric one (with a black heart so my partner would know how I liked it). The lack of packaging also helps the toy catch dust on the surface, but that’s solved with one rinse in water, so no problem really.

The straps on the sides of the panties had enough loops for my solid hips (well, I’m not ashamed of that) so they held well, and I take the leather butt strap as another plus – I was pretty turned on by its squeeze O:) Maybe it would be even more fun to have some sort of pin in place with a wider foot (which they should be standard) that just the belt will go over. So I’d be filled in the front, back, and still have my boyfriend’s butt:) Hmm, next time!