Whoop.de.doo wrapping up with the second edition… REVIEW

I own number 231 of the second edition vibrators (the first one just got dusty, so the second one had to come in). This number probably won’t do you any good in practice, but the paper card (certificate of originality) with the handwritten number and Anička’s signature looks very good to me. Or rather, it has a very good effect on my vanity – I am not the owner of some no name piece. I have the number 231 and nobody else has this number:) And this in my eyes takes the brand (or a particular product) one level higher. 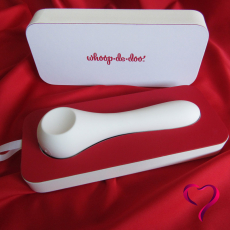 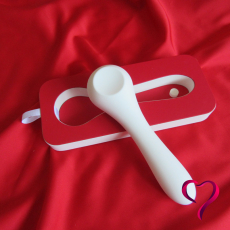 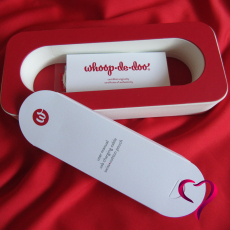 And now for the review…

The box is simple in appearance – you won’t find anything unnecessary on it. But when you look at it in more detail, you’ll find that it’s not as perfect as it first appears. Simply put, the millimetres don’t quite fit exactly and the paper is unevenly applied to the foam. It looks terrible like this, but when you consider that the box is made by hand (and not by some machine controlled by a computer), you put this imperfection behind you. Plus, they’re relatively microscopic imperfections on the packaging that most people throw away anyway 🙂 But I wouldn’t choose red as a base for the aid – it stains the edge slightly and doesn’t come off. 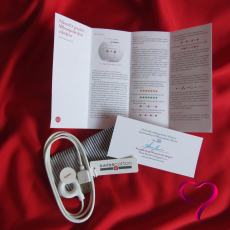 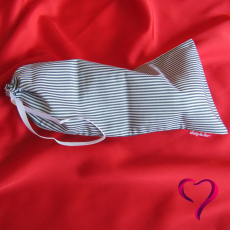 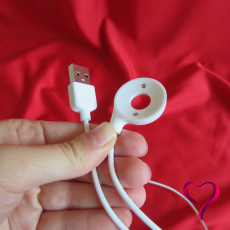 When you want to take the toy out of the box, pull the ribbon and the vibe will slide up. I honestly love it when you can see on a product that someone really thought about it.

And you can see that someone has thought about the shape too – the vibe is simple, smooth, no unnecessary protrusions or other such nonsense – but it has long been known that there is beauty in simplicity. Moreover, it fits perfectly to a woman’s (my) body. And thanks to its smooth shape, it’s comfortable in the vagina – it doesn’t press, it doesn’t scratch… it’s so natural:) I guess the consultation paid off – Anice M. consulted gynaecologists and also a tester – and I was really impressed with the shape when I tested the prototype:)

What do you get in the package?

The Whoop.de.doo has a total of 3 motors in an all-silicone body, yet it retains some degree of flexibility…but you can’t expect to bend it completely:) 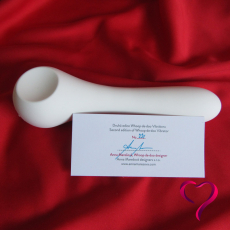 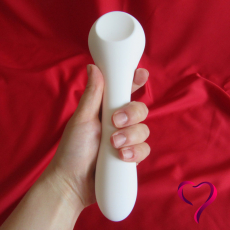 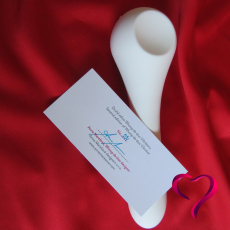 The buttons are also used to switch between modes, intensities, or frequencies. The mode is changed by long-pressing the selected button, and the intensity or frequency is increased (or decreased) with a quick click. Well… I had a problem with this control back with the prototype – I found it illogical and did it backwards every time. And honestly, even after practicing for a few months, I didn’t learn it. In fact, even my friends who tried the controls found it confusing… On the other hand, they all had experience with other vibrating toys, so (like me) they had a certain pattern learned. Newbies will probably be fine:) 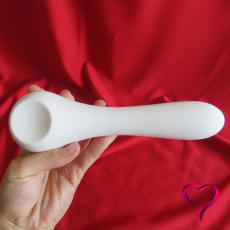 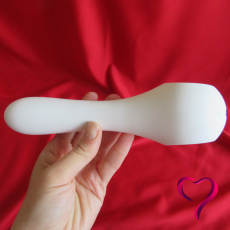 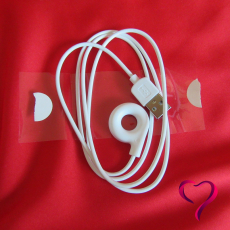 I’m not going to describe the individual vibrations, you can find that in the instructions or try them out for yourself. Anyway, my favourite is (oddly enough) Oh, my whoop!, where it whirs all three motors without a break. Then you just set the intensity and start playing. If you know my reviews, you know that I’m not really into vibrators. There are only a few pieces (I can count them on the fingers of one hand) that can make me come. And that includes a piece from Whoop.de.doo. I like it just on its own, but the biggest bombshell is when my boyfriend uses it on me – that’s when the ecstasy hits:)

When you want to play, you have to charge

An LED will inform you about the battery status, which is between the buttons (if it doesn’t flash, you can’t see it:). I’m not going to go into what each blink means here – this review is long enough without that, and I’d more or less be copying the text of the package insert you get with this toy anyway.

The WDD has a magnetic charger, which fits nicely on both sides. It doesn’t matter if you attach the charger to the gadget one way or the other, the magnets stick. Which is a really big plus – I was recently annoyed at one piece, where the charger only held in one direction. 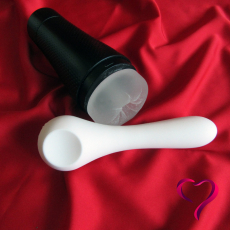 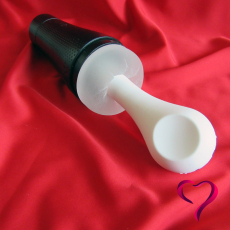 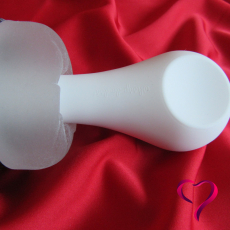 The other end of the charger has a USB connector. I also consider that a big plus, at least you don’t have an unnecessarily large charger lying around your house taking up too much space. You can charge directly from USB or use the socket end, it doesn’t matter – just watch the maximum current – it is 500 mA, to avoid damaging the battery. I also tried charging it from my computer, but that didn’t work… or rather, it was so slow that I lost patience with it 😀

Author
Aly
At first glance, I'm a little red angel. But on second glance, you'll find I'm not exactly innocent. I'm pushing my boundaries (and not just the sexual ones) and enjoying every moment that new experiences bring. I like to shock people around and observe their reactions - it's not out of spite, I want to teach them to talk about sex and desires, I believe it will make their lives better and they will love sex as much as I do ;)